In this audio package you get 33 different loops.

Different but some music are similar to each other.

You can apply them in any kind of game.

There are slower, and faster ones. Dynamic and relaxing styles too.
Some music are more rhythmic, some others are monotonic.

So you can decide what do you want to put in your game.

Consider this asset! It has a very friendly price.
GameSupplyGuy

Wow this is great if I ever make some money from my game ill support you with it :D

Hey Buddy! I have very good news for you!
We're seriously workin' on new audio packages! :)
Thanks for your interest & support.
I really hope your games will be successful because that is one of the best feelings when you can make money from your creative hobby.
Dont forget to share your game with us if you're finished! ;)

Man that's great. I was impressed by the whole collection, especially some of the tracks, it really can create needed tense/atmosphere in the game. Consider making something like that for medieval fantasy setting, would be nice. Definitely will use these tracks in future projects if it fits the atmosphere.

By the way, can you specify if it's necessary to mention you? Like, I'll definitely do that, but it will definitely be helpful and will increase usage of your tracks. Not to mention this way you won't need to reply dozens of people asking for permission.

A lot of Thanks for your comment & feedback! :) Was very good to read.

I hope you find all the loops very useful in your future peojects. Please don't forget to send me if that's finished!

The answer to your question: it's not necessary but I'm happy if people do this and don't forget about me (gamesupply.itch.io). I always really appreciate it :)

Thanks for your honest comment and your useful tips & advices! Here is the > license information if you are interested.

Hey, you know what, is there a way I can contact you? Maybe Discord, else email would be fine.

I'm waiting for your mail ;)

As noticed by our fellow colleague, 6 seconds is hardly called a song. And while I agree, they were built to be on loop, so that thought is the equivalent of looking at a brick and saying you can't be sheltered by it. It is true, but you're not using it properly.

Also, please be humble enough to at least try it before you judge it as "terrible and repetitive", for I'm sure the author has put a great efford in making them, and he was also kind enough to let his (I'm assuming he's a man, because of the "guy" on the name, but I could be wrong) work be free for anyone who wants it.

Hey GameSupplyGuy, thank you very, very much for you effords in all the work you've put on all the assets available for us, lesser beings (this last part is a joke, sort of haha). I really admire your work, and wish you and your loved ones all the love in the world <3

Keep sheltered and taking care of yourself, for you and the people you love <3

Thank you for this honest and long comment. I see you also put a lot of efford to write it! ;)
And also thanks for guarding me, my work, and the good things! You have a very good point of view.
I really appreciate it! =) Keep it up! This is definitely the type of people and comment(s) I like very much!

First of all: the plot twist in this story is the following...
(Just for fun...) I'm currently workin' on new loops :D
FL Studio was blazing in the last some days...

To be really honest...
Sometimes it's hard to handle if people are very critical but a possible way to fix a problem or improve someting.
I also try to learn from these comments / reactions and never see the bad things, only the good things.
I ask myself: What can I learn from these...!?

So that's why I try to "mix & sum" everything in myself to make something better content for everyone.
Maybe my audio loops will be a bit longer in the future but I'm really happy you also like & appreciate these short ones.
Vianamatt! Keep up your positive attitude! Everyone needs some feedback. People really like this kind of honest & kind comments.

Ps.: I understand your joke :) but noone is lesser. We're all equal and we can all learn a lot from each other. As it happened today ;) Thanks for your comments! ^^)

I'm really glad you replied, I'm not even sure why exactly haha
At the time I wrote the first comment, I haven't even heard to these loops, but I was sure its quality were high, just from what I saw in your other works. And boy, was I correct or not ^^

After I commented some hours ago, I went to listen to some of the loops, and around the number 10 I was like "but there isn't any bad or bad-ish music here? Gosh!". At some point, I kept listening for one loop for about one hour! Don't even recall which one was, but I was doing my stuff and kept listening to it without even noticing. So from my point of view, they're not anywhere near "horrible".
When I've read your reply, I made sure to go back to the loops and 1) listen to all of them (I stopped around the 20, before), and 2) write you about the parts that I did and did not like very much, So as you like feedbacks, here's mine, by file names:

About the really honest part, I understand that it's hard to handle some comments at times, and it's ok. Our colleague was minimally polite, some people are not even that, and these are the hardest ones to deal with. But I have 2 views about these kind of situations, 2 commentaries if you will. The first one is that some people doesn't even deserve a reply, you know? They simply want to watch the world burn, and it's not mentally healthy for us to argue, in such cases. And the second is, I don't know how self-aware you are about that, but for your reply to our colleague I could notice that you seem to have a nicely developed emotional intelligence, to a point where you replied very kindly to a not-so-nice-to-read comment, and it was awesome! Haha :D (and because of that, if I had to guess, I'd say you're at least 30 years old, just from the maturity you showed).

As a suggestion, if you want to do some longer loops later, it's okay too, but in my opinion, you could mix them up, then! Some short ones, and some longer ones, because I really liked these shorty short ones haha <3

The things I said before is still true, okay? Keep taking care of yourself, physically and emotionally too, and keep doing this outstanding job you always does. And just as a reminder, as everyone needs to be reminded of it once in a while, I'd like you to watch this video, when you can :)
I know, my reply is already long as it is, but I think it'll be worth it haha

You have great heart! Keep it up!

And a hundred thanks for your long & honest comments!

There's no such thing as a good song that's only 6 seconds long. It's guaranteed to be terrible and so repetitive that it gets muted instantly.

Thank you for your feedback! Look the fact it's free! ;)

There are another music too you can choose.

Have a nice day! 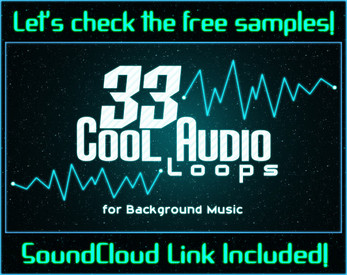